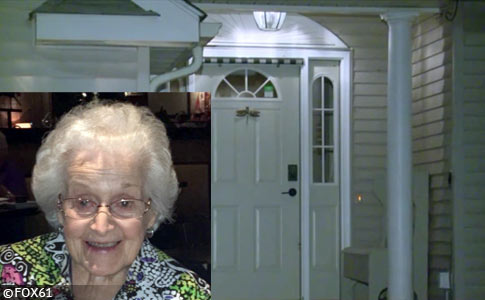 Appeals Destruction Order
UPDATE 11/26/19: Suffield Police have completed their investigation after a pit bull belonging to Annie Hornish, the Connecticut senior state director of the Humane Society of the United States (HSUS), killed an elderly woman while she visited Hornish’s residence on November 6. Hornish told media outlets after the vicious attack that 95-year old Janet D’Aleo died due to “falling.” Police, however, categorized the bite as a Level 6, a dog bite that results in human death.

The police investigation revealed that “Dexter,” which Hornish had adopted about four months earlier, had previously bitten at least two times. The dog bit a person in 2016 and bit another dog in 2018, both bites occurred in the town of Norwich, police said. After the dog killed D’Aleo, the town’s animal control officer declared Dexter “vicious” and ordered the dog euthanized. Hornish is now fighting this destruction order by appealing the order to the state Department of Agriculture.

It is unknown if Hornish knew about the previous bites, but she knew when she acquired Dexter the dog had jumped through a glass window to get outside and required anti-anxiety medication. After the fatal attack, Hornish claimed that Dexter had “never shown aggression” before. Hornish continuously claims she had owned Dexter for six to eight months, but July 9 to November 6 is only four months. Hornish also claims that Dexter had been around D’Aleo “multiple times.”

“It all happened fast,” Hornish said. “Dexter ran into Janet — he knew Janet; she’s been here multiple times — and she was walking, but she was very fragile. She fell over, and we feel it was the fall that killed her.” – Journal Inquirer, November 6, 2019

Why would Hornish fabricate her ownership date of this dog, which at the very earliest was June 20? Perhaps because she wants to place Dexter at “multiple” home events with D’Aleo? The infamous “Birthday Party” video, when Hornish claimed Dexter was “singing” was posted to her Facebook page on July 20. D’Aleo appears to be present, standing behind the woman in the pink floral shirt. D’Aleo is also one of the people in the room that is the furthest away from Dexter.

Finally, while this news was breaking today, Hornish “re-activated” her Facebook account and published a public post that can only be described as shameless, narcissistic and a psychological projection. We certainly hope D’Aleo’s family, Suffield Police and the Commissioner of Agriculture, Bryan Hurlburt — who Hornish served alongside as a state Rep. from 2009 to 2011 — eventually sees it. Several hours after publishing this delusional, self-pitying post, Hornish deleted it.

View: The Destruction Order, which also summarizes parts of the police investigation.

11/15/19: Failed Police Commission Run
On November 5, Annie Hornish appeared on the town of Suffield ballot for police commission — voters could vote for three candidates and five candidates were listed. The following day, on November 6, Hornish’s pit bull “Dexter” attacked and killed 95-year old Janet D’Aleo, who was visiting Hornish’s home. Hornish claimed multiple times on the record that D’Aleo died due to “falling,” even after the Suffield Police Department designated the bite injuries as a Level 6.

The office of the Chief Medical Examiner said D’Aleo died as a direct result of coming in contact with the dog. D’Aleo sustained “massive injuries including flesh, muscle and tendon loss to the lower extremities,” Suffield police said, the very department Hornish sought to oversee with a seat on the police commission. Hornish also continues her role as the Connecticut senior state director of the Humane Society of the United States (HSUS) after her dog killed an elderly woman.

After the attack, Hornish publicly rejected the office of the Chief Medical Examiner’s findings and the Suffield Police Department’s findings. In a written statement Monday to the Hartford Courant, Hornish continued her denials and described the attack, which she did not witness in full, as: “Our dog Dexter was overly enthusiastic in greeting our good friend, and the ensuing chaos resulted in this terrible outcome,” Hornish said. “Our grief for Janet is tantamount and heartfelt,” she said.

The results of the November election are not listed on the city’s website. We reached out to Kenneth Pascoe, the board contact for the Suffield Police Commission. He stated in an email reply, “There were 5 individuals running for 3 slots — 2 Democrats and 3 Republicans.” Both Democrats lost, he wrote, “Hornish and Stromoski.” If she had been elected, Hornish would be overseeing a department she just marginalized through her repeated denials and dishonesty.

11/11/19: Died Due to Level 6 Bite
New information has been released about an elderly woman who died after being attacked by a pit bull belonging to Annie Hornish, who is the Connecticut senior state director of the Humane Society of the United States (HSUS). The office of the Chief Medical Examiner said Janet D’Aleo, of Enfield, died as a direct result of coming in contact with the dog. D’Aleo sustained “massive injuries including flesh, muscle and tendon loss to the lower extremities,” according to police.

Police said under the “Ian Dunbar Bite Assessment Scale, the incident rated a level six of six.” Level 6 of the scale is a dog bite inflicted fatality.

The Ian Dunbar Dog Bite Scale has long been in existence. Level 1 is aggression but no teeth contact. Level 5 is multiple damaging bites from a hard biting dog. Level 6 leaves a victim dead. Dunbar recommends the following for Level 5 and Level 6 biters: “The dog is extremely dangerous and mutilates. The dog is simply not safe around people. I recommend euthanasia because the quality of life is so poor for dogs that have to live out their lives in solitary confinement.”

Last week, Hornish made multiple false claims to media outlets — she’s on the record — that D’Aleo died “due to falling.” Hornish also falsely accused the victim’s home health aide of causing the dog to attack D’Aleo when the aide attempted to save her client’s life. With a Level 6 bite, it is clear the health aide was striking the dog with a metal chair to get the dog to release. The pit bull bore down and was shaking the victim in his jaws then re-gripped and repeated this type of bite.

Hornish also called the fatal attack inflicted by her pit bull a “freak accident,” a term used by pit bull owners since the 1980s to mitigate the deaths carried out by pit bulls every 16 days in the U.S. since 2005. Hornish was not present when the attack began, but claimed to know the sequence of the events. Hornish is also oblivious about her dog’s behavior as seen in the “Birthday Party” video, as well as knowing her pit bull has broken through a window to get outside in the past.

The History of Dexter

From November 2018 to June 2019, a woman named Jessica Kaczynski attempted to rehome Dexter on Facebook. There are exceptions to Dexter, such as, “he jumps through windows that have screens and today he broke though a glass window to get outside — that was the last straw for my parents,” she wrote on June 20. “Anxiety medicine has helped him in the past with this,” she wrote. In comments, she connects with Hornish who offers her phone number to help.

There are several key aspects in the June 20, 2019 post. Kaczynski claims the CT Humane Society will euthanize “because he’s a pit bull.” But, Kaczynski may just be pulling heartstrings in order to find an instant adopter or foster. Hornish buys into it, calling CT Humane Society’s actions “unacceptable.” Further down, Kaczynski states, “We found a potential forever home for him. Just dropped him off there!” It is unclear who this owner is, but Hornish is the owner by July 9.

The November 2018 post was left at Pit Bull Rescue Central. “Looking for a home for Dexter, a 3-year old male pit bull, whose parents were evicted from their apartment and face homelessness … I found a temporary foster home for him but they can only keep him for a couple of days,” she wrote. If one adds up “only known” homes, Dexter had six different owners by the age of 4 when he reaches Hornish. This excludes unknown fosters and “forever homes” that failed to pan out.2

Lastly, don’t miss the “Birthday Party” video on Hornish’s Facebook page. Hornish’s pit bull, “Dexter,” quite literally takes over the party in an unpleasant and “overexuberant” manner. At about 7:30 pm Friday, Hornish removed her Facebook page — we have replaced with copies.

How Our Pets Help Us During These Challenging Times

HSUS Urges Lawmakers to go After Small Businesses During COVID-19

Discover more about Petland in our Video Gallery! Packed with tons of valuable information, our gallery was designed to educate everyone on what Petland is all about!

Through Petland Charities, a 501c3 organization, Petland partners with the communities their corporate stores call home to raise funds for local shelters and K9 units.

We're working to end cruelty and substandard care. We share in the concern of communities and have a common objective to put puppy mills out of business. That’s why we’re continually working to push for the highest standards of care at our breeder facilities and in our own facilities. Get the facts.

Petland Gives Back to Communities via Petland Charities

Learn how Petland is giving back to local shelters and K9 units through their new charitable giving organization, Petland Charities.